October 28, 2018
Dear Friends…
Several citizens have shared concerns whether Scottsdale has addressed its water needs responsibly. I reassure them, thanks to visions more than 30 years ago, The City of Scottsdale is at the forefront of water reuse and considered one of the leaders in the industry not only nationally but around the world.
It was a vision born of necessity.
In June 1980, the Arizona legislature awakened to the long-term risk of depleting our underground aquifers and passed the historic Groundwater Management Act (GMA), setting stringent restrictions on groundwater pumping. In a first response, Scottsdale adopted a city ordinance in 1981 prohibiting the use of potable (drinking) water or ground water for large turf area irrigation.
At the time, Scottsdale was largely dependent on groundwater for its potable water needs. Furthermore, the city was paying to dispose of all the wastewater (effluent) generated. Whereas most cities treat their wastewater, then dump it into a nearby river, Scottsdale’s only option had been to pay for its disposal. Phoenix was (and still is) paid to treat effluent from south Scottsdale before sending it to the Palo Verde nuclear plant for use as cooling water.
But times were changing. The city was expecting rapid development to the north that would require even more potable water along with an expansive sewer collection/conveyance system. Additional water demands were emerging for irrigation of newly developing golf courses.

Furthermore, customer needs would be different: an average golf course needs one million gallons per day (mgd) in the summer, but less than 100,000 gallons per day in the winter. Fortunately, their irrigation water does not have to be potable.
Some city leaders challenged, “Why not develop a plan to capture our own water resource – wastewater – and reuse this effluent for golf course irrigation?” There is unquestionably value in effluent, which is, after all, 99% good water.
Gainey Ranch provided the first “test case.” An agreement was executed with Gainey Ranch developers in November 1981 to provide up to 1.7 mgd for irrigation of their planned 27-hole golf course using water from a newly constructed treatment plant which they paid for and deeded to the city. Anything not needed for irrigation would be diverted to Phoenix for Palo Verde cooling water.
With this proof of a vision to treat effluent for irrigation, others began to imagine a bolder vision – a water reclamation plan to treat even more effluent and also find profitable uses for the irrigation water not needed by the golf courses in the winter. Some asked, “Why not treat the difference and pump it back into the ground to recharge the aquifers?”

Master planning efforts on a grander solution began in earnest. The principal actors on stage were Leonard Dueker, then city engineer, and Tim Bray, retired city employee who had hired Leonard years earlier. Backed by a supportive Council, they proposed an audacious goal: construct a water treatment facility capable of meeting all golf course irrigation demands and also construct an advanced water treatment facility capable of meeting groundwater quality requirements for recharge. To make it feasible, massive new systems would have to be built to convey the effluent to the treatment plant, and another system to convey 20 mgd of treated irrigation water to golf courses in north Scottsdale. All of this had to be done while protecting Scottsdale citizens from bearing any cost of the golf course irrigation demands.
Conversations began in 1985 with the developers of Desert Mountain, a community that needed to quickly find an alternative to groundwater for irrigating their golf course development. The concept of a public/private partnership finally took form when Desert Mountain signed the first agreement with Scottsdale in 1991.
In the meantime, anticipating a level of participation by more Scottsdale golf courses, voters were presented with a bond proposal in 1989 to provide funding for the water campus facilities and seed money for the reclaimed water distribution system. Agreements were eventually executed with more than 20 golf courses, stipulating in each case they would acquire water rights from the Central Arizona Project (CAP), then deed those rights to the city in return for a guaranteed delivery of irrigation water. Today, because of these agreements, Scottsdale enjoys the third largest CAP allocation, behind Phoenix and Tucson!
By 1993, the City began receiving allotments of water from CAP pursuant to these agreements. By 1995, when the valley hosted the Super Bowl, the urgency of completing the treatment facility became evident as Scottsdale had to dispatch a fleet of tanker trucks to collect and transport effluent to the Phoenix treatment plant. Finally, in April 1997 the City began construction of the largest capital project in the city’s history and on October 14, 1998, after 18 months of frenzied construction, the Scottsdale Water Campus began operation. 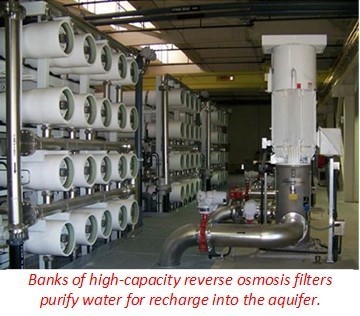 Over the decade of the 1980s, what evolved as a vision for a Scottsdale Water Campus, stands today at N. Pima Road and Hualapai Drive north of the 101. The campus’ extensive use of microfiltration and reverse osmosis technology makes it one of the largest and most sophisticated indirect potable reuse facilities in the country. Since 2006, the City has achieved True Safe Yield, meaning we recharge more water into the aquifers than we extract. Since the facility began operation, over 16 billion gallons of reclaimed water has been recharged into the aquifer, while the City has met all the irrigation needs for 25 golf courses and demonstrated industry leadership in water reuse and recharge.
This is just one of the several visions by a prior Council that made Scottsdale a truly amazing place to live! It stands equal to the vision that converted the Indian Bend Wash into parks, the vision that brought Spring Training to downtown and the vision that transformed a flood basin into the TPC to attract the largest PGA golf tournament in the world. Eighteen of these prior Councilmembers and Mayors endorse my candidacy for re-election.

“What can you do to help my campaign?”

I appreciate your continued interest in following my campaign. There are now only 9 days to election!

Birthday of the Preserve…

Getting to Know Me…

What Would Herb Have Said?

Thoughts on a AAA